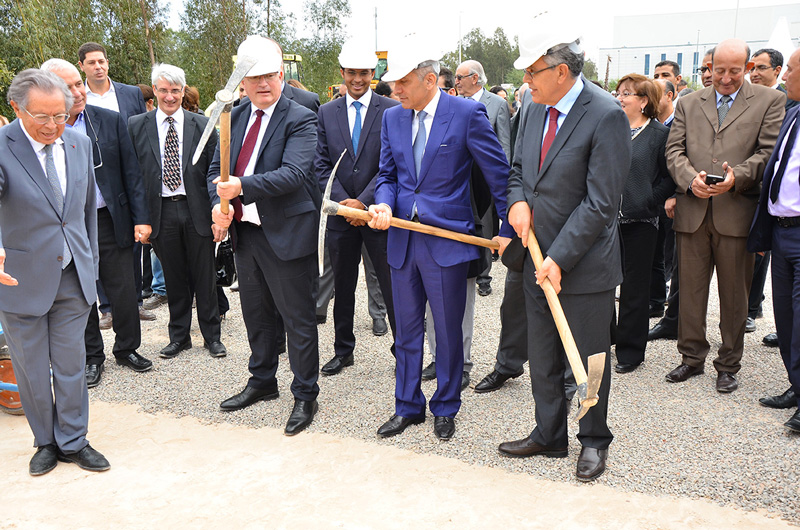 On Wednesday 2 December 2015, Moulay Hafid Elalamy, the Morrocan Minister of Industry, Trade, Investment and Digital Economy, and Cédric Gautier, CEO of STELIA Aerospace, laid the foundation stone of the Group’s new factory in Casablanca.
This factory has a surface area of more than 15,000 m2, and will supplement STELIA Maroc’s current infrastructure.

It will ultimately house between 400 and 500 employees building complex aeronautic sub-assemblies, including fuselage components for the A320 and A330. The total number of STELIA Aerospace employees in Morocco will thus exceed 800.

Mr Elalamy took the opportunity to say how delighted he was with the enhanced presence of a major world player in aerostructure, and emphasized how well the STELIA Aerospace project accorded with the Industrial Acceleration Plan 2014 – 2020. “The Group’s activity centred around aerostructure assembly will unquestionably contribute to the growing importance of the Assembly ecosystem, launched last July as part of the new industrial strategy”, he added.

Mr Gautier said that the Group’s new unit would support growth and higher rates of production for STELIA Aerospace, and represent an additional competitive cluster based on STELIA Aerospace’s model of an integrated local supply chain. Mr Gautier added that Morocco was now established worldwide as a centre for aeronautical manufacturing, and that it could pride itself on true centres of excellence that offered aeronautical operators great potential and opportunities for growth.

Apart from STELIA Aerospace’s role in the “Assembly” ecosystem, Mr Elalamy also stressed the desire of both parties to work together to meet all the prerequisites for structuring around the Group a global ecosystem that would unite a number of sub-contractors and suppliers.

Moulay Hafid Elalamy, the Moroccan Minister of Industry, Trade, Investment and Digital Economy, and Cédric Gautier, CEO of STELIA Aerospace, presided over the laying of the foundation stone, in the presence of Abdellatif Loudiyi, Minister Delegate responsible for the administration of National Defence, Mamoune Bouhdoud, Minister Delegate responsible for small businesses and integrating the informal economy, Khalid Safir, Wali (senior governor) of the Casablanca-Settat region, Governor of the Prefecture of Casablanca, and Hamid Benbrahim El Andaloussi, President of the Moroccan Space and Aeronautical Industries Group (GIMAS).

STELIA Aerospace is a wholly-owned subsidiary of the AIRBUS Group, created on 1 January 2015 from the merger of Aerolia and Sogerma. It has a turnover of 2.3 billion dollars and 6,100 employees worldwide, making it a world leader in the fields of aerostructure and seats for pilots and first-class and business class passengers.

STELIA Aerospace has had a presence in Morocco since 1951, via its subsidiary Maroc Aviation, now STELIA Aerospace Maroc, which specialises in manufacturing composite, assembling complex metal sub-assemblies, and maintaining and supporting avionics equipment.